You are here: Home / What's on / News / Craig Naylor is Box League Champion!

If there had been an award for best trick shot it would have gone to Tom who produced a Federer style winning tweener.

Karen too, hitting some tramline stunners from outside the court that had the spectators gasping.

But all in vain. After being 0-4 and 2-5 down, Craig and Tom turned up the heat pulling back to six all and winning the tie-break 7-1.

Congratulations to all four for completing their Final in adverse conditions and well done Craig for sustaining his record of winning every round that he played in.

There's going to be a break now and Round 3 will be launched later in the year. 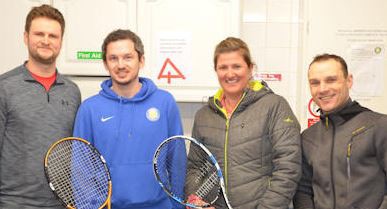